Playing PUBG mobile on a mobile device is surely a great experience. But for playing PC version will cost you several bucks. But there is nothing to fear as you can enjoy PUBG mobile experience on PC as well with the help of emulators. Here are 4 but the best emulators for PUBG mobile to use in 2020.

Emulators are a software that allows one computer system to work like another computer system. Basically, you can use apps that are made for one OS on another OS.

Does it affect my computer???

No, It is like any other software that runs on your computer, but they might consume more RAM.

We have tested all these Emulators on Windows 10 PC, but these will also work great on other Windows versions as well.

BTW this list of Best emulators are completely ranked on the basis of Features they offer and their performance.

These Emulators are also great for other games as well and not only limited to PUBG.

MEmu is so far the Best emulator we have tested for PUBG mobile with great speed and it provides more features than any other emulator available out there.

It also supports 60 FPS gameplay, which is missing in any other emulator. MEmu Play is also best for gaming on low-end PC’s as well no matter what game you are playing.

It has a Battle Royale option which has predefined controls and we don’t need to remap the settings.

This emulator also auto update PUBG which is also a feature, not all emulators provide.

If you talk about gaming, menu is the best emulator in terms of the options it provides with really good gaming performance.

How to play PUBG on MEmu…..

Note: If you are having issues while playing, change graphics rendering option from DirectX to OpenGL 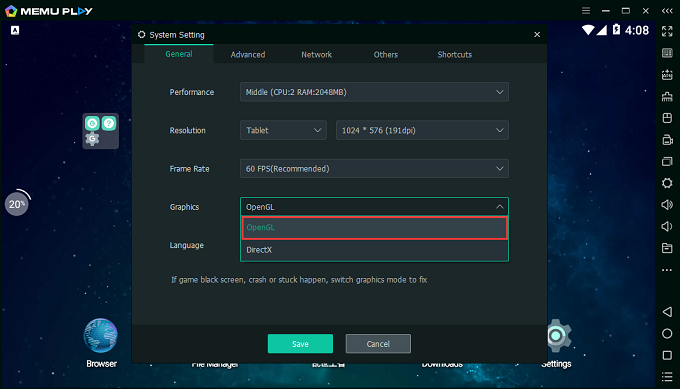 This is the official PUBG mobile emulator from Tencent and surely it provides some better performance for PUBG.

But if you want to play other mobile games as well on PC, then having this along with other emulator sucks as this will only run PUBG and not other games.

This emulator runs on KitKat 4.4. Also, you have to first tweak the settings(depending on your PC’s configuration) for a better performance.

One thing I didn’t like about Tencent gaming buddy is that I saw lots of frame drops across the gameplay while shooting, landing and even at the places where I have never seen frame drops before. However, I experienced low ping and less connection erros some of which I found in other emulators.

For better performance: 15 Incredible Ways to speed up your slow computer

This is the most popular emulator out there on the internet which provides a really smooth performance consistently. I have been using Bluestacks for quite a while now and never experienced any issues or annoying things that made me to uninstall Bluestack.

This emulator got the best interface from other emulators running Android Nougat.

I recommend BlueStacks if you have a low end PC as it is a pretty heavy software. You can also create multiple instances and play multiple games at one time.

There are certain problems with BlueStacks like you can’t turn 360°, right click to aim and it is also missing several basic features.

I recommend using the latest version of BlueStacks or else the gameplay will be pretty laggy. I personally won’t recommend Bluestacks for playing PUBG as there are other better emulators for that.

This emulator provides a pretty good number of features and have a decent performance.

This pretty much gives you control of other features like sound, brightness while playing.

Good for low-end PC’s and laptops, even for gaming and multitasking. Simple interface and comes with some handy features. Nox Player comes with compatibility support for external controllers, mics or cameras.

I have seen some lag during the gameplay and also key mapping is annoying and you have to remap the setting every time you play different games. In this case MEmu is the best.

And that’s it for this list of the best emulators for PUBG mobile to play on PC, we don’t feel the need for extending this list any further. The winner is MEmu emulator and there are reasons that make it different from others.

If you also want an Emulator for productivity and can work smoothly on low-end PC, go for Nox player. It is great for multitasking and is very lightweight.